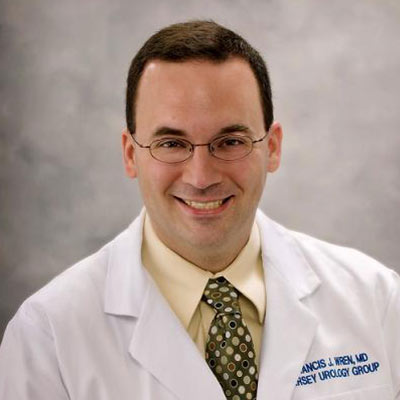 Francis J Wren, MD (Frank) founded Jersey Urology Group with Doctors Schutz and Piskun with one goal in mind: To bring university level care to our neighbors at the Jersey Shore. Dr. Wren attended the University of Scranton on a full presidential scholarship and graduated Summa Cum Laude with degrees in both Philosophy and Biology while earning the University’s Bernard and Kathryn Hyland award for Excellence in Biology given to the highest ranked graduate in biology as well as the Excellence in Philosophy award given to the highest ranked graduate in philosophy. He then attended the University of Pennsylvania and served as President of the Medical Student Government. He graduated with his Medical Degree and was awarded the Morris Ginsburg Prize, a faculty award given to the graduate who best demonstrates the qualities of the ideal physician.

He did his general surgical internship and urology residency training at the Penn State/Milton S Hershey Medical Center. While a resident, he won the 39th Annual Howard Pollack Radiology Competition of the MidAtlantic Section of the American Urological Association. He also completed the National Urology Preceptor Program in female pelvic medicine at the Cleveland Clinic. At graduation, he was awarded the Pfizer Scholars in Urology Award. He is now currently Board Certified in Urology.

His clinical interest in practice is medical and surgical management of female and male voiding dysfunction including leakage, retention, pelvic pain, and voiding symptoms. He has lectured frequently on voiding dysfunction. He focuses on medical quality improvement with a goal of achieving better measured patient outcomes with higher patient satisfaction at a low cost to society. He serves as a consultant to many diverse medical practices to help them achieve these higher patient outcome, satisfaction, and quality metrics while maintaining cost control.

Dr. Wren also works as President of Jersey Urology Group. He also serves our local community as a Board Member for Atlanticare Regional Health System and is Vice Chairman of the System Quality Committee. His personal interests include spending time with his wife and children as well as serving the needs of his local community.